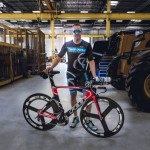 People participate in all sorts of activities to battle the pitfalls of desk work. Maybe they run, cycle or swim. Some, like Regional Service Manager Toby Miller, do all three. Miller, a triathlete, is driven by pure goals. “My family history has a lot of heart problems and diabetes, plus my work creates a shortage of fitness and an excess of stress,” he said. “Triathlons offer a quick release, plus they require a lot of determination and focus, so I really feel like I’m getting a lot of essential benefits.”

On September 4th, Miller will compete in the IronMan 70.3 World Championships in Queensland, Australia. After last year going sans family to IronMan 70.3 World Championships in Canada, he was determined to make it to Australia this year. “I really regretted not taking my family to the first championship held outside the United States last year, so when I found out this year’s event was on the Sunshine Coast, I was determined to make a healthy family vacation out of it,” Miller said.

Spots for the World Championships aren’t given, but rather earned through qualifying races. He raced Coeur d’Alene’s full IronMan — his first 140.6-mile, three-discipline race. After failing to qualify there, he raced the IronMan 70.3 at Lake Stevens, Washington. There, he missed qualifying by one spot. Then, after a poor race in Henderson, Nevada where participants had to deal with hot, windy conditions, he received a letter notifying him that he’d qualified for Australia. “My family was starting to get a little bit annoyed,” he said. “But once I got that letter and we all knew I could just focus the rest of the year on Australia, they turned around. We’re all excited to be going.”

The IronMan 70.3 competition involves a 1.2-mile swim followed by a 56-mile bike ride capped off with a 13.1-mile run. For Miller, who started out as a runner and feels strongest on the bike, it was the swim that created the biggest obstacle for entry into triathlons. It took some prodding from an inspirational friend to get him to finally take the plunge.

Always the competitor, Miller used to be a bareback bronc rider, and one of his rodeo buddies participated in triathlons. His friend was constantly trying to convince Miller to join him, but Miller’s response was always, “I can’t swim.” One day, while training on his bike, his friend was hit by a pickup and became a paraplegic. The two continued to work out together during his friend’s rehab and eventually his friend returned to doing triathlons. Again, the pleas came for Miller to join and Miller’s response of an inability to swim. His friend looked at him and said, “I’m a paraplegic – what’s your excuse?” The question caused Miller to commit to competing in a triathlon.

Once he started training for his first triathlon, he discovered an incredible healthy passion. And once he finished his first triathlon, he wasn’t satisfied with the completion of just one. To date, Miller has done one full IronMan and 13 IronMan 70.3 competitions. Already, he’s thinking of his next goal — to reach the World Championships for the full IronMan in Kona, Hawaii.

The more a person talks to Miller, the more it begins to sound like he isn’t only guided by the desire to live a healthy life. Eventually he admits as much. “I do triathlons because there are innumerable health benefits,” he said before adding, “And, I just really like racing!”

For someone that likes their sports in clusters of three, it makes sense that they might also enjoy the trifecta of benefits — for the body, the mind and the thrill of competition.