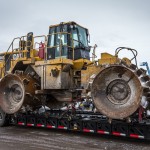 WESTERN STATES BULLDOZES OTHER DEALERS FOR THE BIG WIN.

This past November, Western States went toe-to-toe against other dealerships in an RFP (Request For Proposal) bid process for Republic Services certified rebuilds.

The customer, a nation-wide solid waste and recycling company, was looking to partner with a Cat dealership on a three-year contract for certified rebuilds in their Northwest region. The region spans nine states (Idaho, Montana, Wyoming, Colorado, Utah, half of Nevada, northern California and up through Oregon and Washington), The RFP outlined the opportunity to rebuild up to 30 machines over the course of the contract, with eight machines currently waiting to be rebuilt.  The stakes were high as several Cat dealership in the northwest were eager for the business.

Led by Product Support Sales Manager Alex Freter, it was “all hands on deck” to pull a proposal together that would set WSECO apart from other dealerships. The Service Quoting team stepped up in a big way to create 28 different configurations and standards jobs, Heavy Haul provided hauling support and marketing assisted with sales material and video to present the rebuild process.

“This was truly a team effort and something we should all be proud of; our people continue to be a key differentiator at Western States and this is a great example of that” -Alex