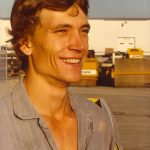 It’s 1978. Space Invaders just hit video arcades. The first test tube baby is born. Gold’s a whopping $200 per ounce and minimum wage is $2.65 an hour. The Bee Gees rule the airwaves while Grease, Superman, Animal House, Halloween and The Deer Hunter rule the box office. And the day after Christmas, with only a few days left in the year, Grant Egley embarks upon what would become a 39 year journey with an outfit in Pocatello called Western Equipment Company.

Fast forward 11 years to 1989 and Grant has distinguished himself as a technician – enough so to earn himself a position as our resident field technician for Monsanto, a position that he retained until his retirement earlier this year.

Last week on March 2, the Pocatello team, spouses and family gathered at the Sandpiper Restaurant to celebrate Grant’s career and service to Western States Cat. Stories were told – some of which were true – about Grant’s tenure as a WSECO tech and life on a mining site. There was nostalgia, reminiscing, and disbelief at how fast time charges forward.

So is Grant done turning wrenches? Probably not – he’s farmed his own operation on the side for a number of years and will continue to pursue that in retirement, so it’s likely he’ll still do the occasional PM now and again.

Congratulations on a distinguished career Grant, and best of luck on the farm.