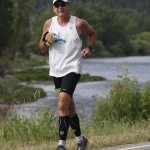 Missoula’s Glenn Burwick, Parts Consultant, knows a thing or two about machines. He also knows a thing or two about running long distances. While the former is knowledge he’s gained from many years of experience, the latter is something the 68-year-old Montanan has picked up in just the past six years. A few weeks ago, he used this newfound passion for long-distance running to complete his sixth Missoula Marathon.

For whatever reason, running long distances tends to spawn a thought of impossibility in many people’s minds. Six years ago, Burwick was no different. “I was 62 when I first started running,” he said. “My daughter ran a marathon and I was really proud of her, but I thought, ‘I could never do that.’ A few weeks later, my wife talked me into going to a running class, and now here I am coming off my sixth marathon.”

Ask Google what the most difficult part of running a marathon is and an overwhelming number of results deal with fear and self doubt. Burwick agrees that mental toughness is the most difficult hurdle to clear when running a marathon. “When you’re running by yourself, it’s such a mental game. You have to keep your brain on point so it doesn’t convince you to quit,” he said. “After about 14 miles, your stomach shuts down and can’t process foods, but you have to have sugars feeding your body and brain. I usually eat straight sugar cubes at that point just to keep my brain focused.”

This mental control doesn’t just happen on race day, though. The preparation for such a feat begins well in advance. Burwick’s training begins around January 20th each year. Keep in mind he lives near Missoula, and if you know nothing else about that area, you probably have an idea that it gets snow and ice. Thankfully, he’s a resourceful sort and solves the issue of running on slick surfaces with a bit of ingenuity. “I get a pack of 1/4″ machine screws and drill them into my GoreTex shoes,” he said. “I get excellent traction that way at a fraction of the cost of new winter-only running shoes.”

He trains with two five-mile runs twice per week and one long run per week. The long run is around 13 miles at the start of his training, building up to 29 miles before race day — almost three miles longer than a marathon. “That way, I’m sure my body is up for it,” he said.

Running has gotten in Burwick’s blood as he competes in numerous half marathons each year in addition to the six marathons he’s run. The furthest he’s traveled for a race was 2,200 miles to Atlanta, Georgia for a half marathon in December, while he counts a six-person 24-hour relay through Zion’s National Park as one of his most memorable events. As for the rest of 2016, Burwick has already planned two half marathons and is looking to enter a third. When I asked him if he called in sick Monday after running the marathon on Sunday, he responded, “Oh, no! I was back into my training schedule by Tuesday. The body bounces back pretty fast when you’ve been at it a while.”

So he goes on, putting one foot in front of the other at work, at home and at play. It’s just what he was born to do.