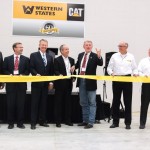 For two glorious nights last week, Pocatello opened its doors to customers and the community for a grand opening that won’t soon be forgotten. With exclamations of praise overflowing from the lips of attendees, it was evident that Pocatello left an indelible impression on everyone present.

The opening night was a private event with customers, state and local officials, Caterpillar representatives and employees from across the company. The truck shop was converted to a reception area where employees and guests could mingle, take part in a potato bar (because Idaho!), sip on drinks and enjoy the festivities. Pocatello employees did a great job making sure the place sparkled, and guests could never tell that hours earlier trucks in various stages of repair had occupied the area. Employees gave guests private tours of the facility before Western States’ CEO Tom Terteling, President Tom Harris, Regional Service Manager Jeff Painter, Idaho Governor C.L. “Butch” Otter and Pocatello Mayor Brian Blad each gave a short speech. A ribbon-cutting ceremony made everything official, and the rest of the evening was given to friendship and conversation. All told, about 320 people attended the event, including the bulk of the area’s main customer base.

The second night had a much different — but equally satisfying — feel to it as an estimated 1,200 members of the community filtered through the doors during an open-house event. Guests toured the facility on their own, gathering knowledge from employees stationed throughout the grounds. Kids were able to experience the thrill of sitting in the cab of a few machines while parents got the chance to practice FBI-level negotiating skills to convince them to come back out.  A repeat of the speeches — minus the governor’s speech — and another ribbon-cutting ceremony capped off the busy evening.

It would be remiss to discuss this event without mentioning the incredible team effort that made it possible. From setup to tear down and everything in between, there were so many people involved they can’t possibly all be mentioned here. Witnessing everyone come together when the moment called was impressive, and the smiles on their faces showed a certain pride in being involved with the special nights.

Today we can bask in the afterglow of a successful grand opening and open house because so many people did what needed to be done under pressing circumstances. As we all celebrate the continued march of progress within the company, we can view the facility in Pocatello as a cornerstone of Western States’ future.