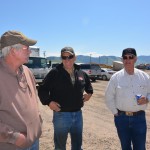 MISSOULA BBQ IS ALL ABOUT THE PEOPLE.

Have you ever noticed that some things in life are almost universally enjoyable? For instance, everyone likes dogs, chocolate…and Missoula.  Spring time in Missoula is sort of like ordering an ice cream cone and receiving two. Beauty is expected, but when the valley is graced with the bounty of spring, the brain can barely comprehend the amazing landscape. Such was the setting for the recent Missoula customer-appreciation event

Once a person comes to grips with the striking natural beauty of the valley, the most notable thing at the store is the people. They’re genuine, and it soon became apparent that customers appreciate that about them. As Larry Moritz, Product Support Sales Rep, and Mark Hennes, Regional Service Manager, kept hotdogs and hamburgers coming fresh off the grill, customers began interacting with employees in a way that wouldn’t have been possible without real relationships. The customers were genuinely happy to see the employees, and that’s not something many companies can say.

A steady stream of customers came by for three hours to enjoy burgers, dogs and stories under the shadow of a 988K Wheel Loader that had been strategically placed as a wind barrier for the grill. Unfortunately it didn’t quite serve as an effective wind block (the grill was moved to an entrance of the truck shop), although along with its 10-yard-capacity bucket, it did generate plenty of interest. In addition to the grub and friendship, customers had ample opportunity to sign up for door prizes, highlighted by a soft-sided rifle case and two ice chests.

When the last table was folded up and the final chair stacked away, a buzz remained around the store. Friendships had been solidified, stomachs had been filled and another customer-appreciation event had come to a close. In the midst of what can only be described as paradise, our Missoula store proved that it’s still the people that make a place truly special.