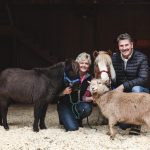 “We want people to know that whatever they’re going through, they don’t have to go through it alone.”  -Laurie Bell

The team at Western States helps countless non-profits and charities throughout the communities we live in.  Sometimes one organization stands out, and we visited the Mini Joys Ranch outside Boise, Idaho operated by Ken and Laurie Bell. With this unique sponsorship we chose to take the time to better know who it is we are supporting in our community.  After a tour of their facility, Ken and Laurie started to share their story.

Laurie always loved horses.  “I came out of the womb loving horses,” she laughed.  “I’m pretty sure my first words were ‘mommy’, ‘daddy’, and ‘pony’.”  She had a horse while growing up in Buhl, but had to leave it behind when she left for college and during 20 years thereafter when Laurie worked as a PE teacher in the Treasure Valley.  Things finally came full-circle in 2009, when she heard about an equine therapy program in another state and decided to try replicating it herself.  Today the Mini Joys Ranch has grown in size to four miniature horses, one miniature donkey, and two goats.

Mini Joys assists over 4000 people each year, but prioritizes work with individuals with terminal diseases, foster children, special needs kids, and those in assisted living facilities.  While they sometimes present at school assemblies where several hundred kids will gather to hear their message, Ken and Laurie find some of the hardest but most rewarding work is in pouring their hearts into individual kids who are hurting.  “Several years ago we worked with one young man who had been in and out of a number of foster homes.  He kept asking us to adopt him,” said Ken.

Laurie agreed, “At its core Mini Joys isn’t about just a one-time experience of petting a horse.  We connect people- kids, and even volunteers.  The volunteers have gone through ups and downs, sickness and loss together.”

Laurie recounted the story of Canyon, a little boy with a terminal disease.  He had met the Mini Joys when they were doing a hospital visit, and fell in love with Levi, one of the miniature horses.  Laurie also got to meet Canyon’s mother and grandmother during the visit.  A few months later Laurie and the horses visited the hospital again, and while they were waiting for Canyon to be cleared by the doctors to see the horses, Canyon’s grandmother started to share with Laurie about Canyon’s situation:  Canyon was being sent home soon because his disease had progressed to the point where the doctors could no longer do anything more to help him.  Laurie gave the family her contact information and promised to bring Levi to Canyon’s home for one last visit.  Not that long afterwards, Laurie got the call from Canyon’s family.  “I was driving over in tears.  It was so hard.”  However, Canyon’s mother and grandmother are starting to find healing volunteering with Mini Joys.

Teaching is another large component of the Mini Joys program.  Laurie has written and published three books about being the best you can be, being yourself, and understanding and responding to bullying.

“Kids need to hear that it’s OK to be themselves, no matter if they’re in grade school or high school,” said Laurie.

A smile crossed Laurie’s face as she told the story of how the Mini Joys were visiting an assisted living facility.  While making the rounds, Laurie came upon an elderly man with her book in his hands.  “I wish that I had known 90 years ago that it was OK to just be me,” he told Laurie.  She learned afterward that although he had a successful career, he came from humble beginnings and always felt like he didn’t quite fit in.

After spending any length of time at the Mini Ranch, Laurie and Ken’s passion to help people is plainly evident.  “We attend a couple of large conferences for non-profits each year, and some of the things I hear just make me sick,” she said.  “It seems like so many organizations have lost their focus on helping people and are just in it for the money.  We could have made tons of money if we sold play dates with the miniature horses, but for us it’s always about the people and never about the money.”

Mini Joys keeps its costs low by relying on the assistance of a team of volunteers to help around the ranch and with events.  “We’re always looking for more volunteers!” Laurie laughs.  They recently finished construction of a wheelchair-accessible treehouse, after realizing that many of the kids they work with, and especially those with mobility concerns, had never been in a treehouse.  Local contractors and construction companies were major contributors to the project, and have been huge supporters of Mini Joys since its beginning.  Laurie’s father was a local contractor and he was instrumental in raising support for the charity among his construction friends and co-workers.

“My father passed away some time ago, but sometimes I still ask him, ‘Can you see what you helped me start, Dad?’”