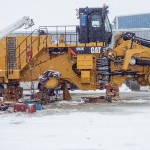 Wind. Snow. Ice. Negative 20 degrees Fahrenheit. That’s usually enough for common folk to sulk into hibernation and curse old man winter for being such a cold-hearted (insert foul name here). But, for our fearless Field Service Technicians this was just another wintry work day.

One morning in early January, Stan Tuckness and Eric Mai were assigned a very large 992K delivery to a customer in Durkee, Oregon. The gigantic piece of iron that is the 992K was delivered in several pieces, requiring on site assembly and inspection by our field service techs. Based in Meridian, Idaho, Stan and Eric embarked on a collision course with vicious weather conditions from the West. Headway was difficult. Drifting snow and ice led to road closures and temperatures plummeted well below zero – so cold that the two field techs thought they had traveled to Siberia by mistake. But carry on they must, and carry on they did.

Conditions did not improve once the technicians arrived on site either. With a large amount of assembly required outdoors there was no escaping the piercing cold.  The epic duo jumped right in and got to work without so much as a shiver of dismay. Cranes were hoisting, wrenches were spinning, and grease was pumping. Nothing could stop them.

At last, assembly was complete and the customer was ecstatic. The intrepid field service techs returned from their conquest, cold and hungry, but triumphant. Once again, Western States Cat employees kept a positive attitude, worked together and exceeded expectations.  “It’s just another day in the office,” they quipped.

Well done fellas. Now go curl up by a fire and sip some hot cocoa.