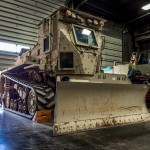 Every once in a while, something will roll into one of our shops that commands the attention of everyone there. In Missoula, that something is a fearsome-looking beast with papers from Kandahar.

The machine is a Cat M105 Deployable Universal Combat Earthmover (DEUCE) and it’s in Missoula for a rebuild. It was made to replace the D-5 bulldozer in military applications due to a combination of power, speed and agility. It boasts powerful earth-moving capabilities, yet reaches top speeds near 40 mph, meaning it can self deploy and keep up with other ground vehicles. Another difference from the D-5 bulldozer is noticeable as soon as you jump in the cab — the controls are like you might see in a car: steering wheel, accelerator pedal, brake pedal and an automatic transmission. This reduces the learning curve for soldiers, making it easy for almost anyone to drive.

In Missoula, there is a gleam in Jim Sund’s eyes as the technician talks about the armored machine. “I’ve been around Cat machines a long time and it’s really neat when something like this rolls in. It’s different, which makes it fun and interesting,” he said.

A window pane on the driver’s side is riddled with the evidence of bullets, although how they got there remains a mystery. “We don’t know a lot about [the machine], but the paperwork we received mentions Kandahar,” Sund said, referring to the second-largest city in Afghanistan. Whatever the case, one thing is certain: when those technicians in Missoula get finished with it, it’s going to be one big, bad machine once again.