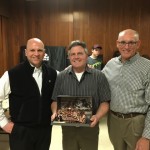 “Great people are not replaced and will not be forgotten.” – Bob Merritt, AECOM EIC Director of Equipment

Thirty-nine years ago Ted Rosa began his career at Western States and last week we had the opportunity to thank him for his service. The quote above was just a portion of the sentiment received from one of our largest customers AECOM, to be read at his retirement party and the sentiment can be said for the entire team at Western States.  His contributions to the current facility in Pocatello as well as his contributions behind the design of the new facility in Pocatello have solidified Ted’s lasting legacy at Western States and he will most certainly not be forgotten.

We wish Ted the best in this next chapter and sure hope to see him around the new Pocatello facility.