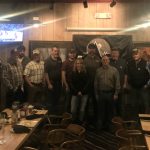 On February 1st, the Pocatello Service team celebrated the retirement and achievements of Leo Miller’s forty-one and one half years of service with Western States.

Leo began his journey with Western States in August of 1977.  His initial responsibilities as a Service Attendant included supporting the activities and efforts of Shop Technicians, while simultaneously learning a future craft in Component Rebuild.   After a short period of time, having exhibited an eye for detail and a quick-learner’s capability, Leo took on the challenges of a Component Rebuild Technician, where he demonstrated particular high competencies in power train and hydraulic components.

His technical depth soon earned the respect of teammates and Leo emerged as a Foreman over Power Trains, where he led by example for many years, helping entry level to master level technicians achieve the highest in quality results.  As the opportunity approached with a new facility and new CRC business concept in Pocatello, Leo was selected as the CRC Service Adviser and remained in this vital role until his retirement.

Throughout his time with Western States, Leo has been relied upon as a specialist in his field, a trusted go-to for so many technicians, managers and customers across the territory and even Caterpillar-wide. His commitment to excellence, his willingness to exceed expectations and personable demeanor have sculpted a legacy for others to follow.

As Leo looks to take on the next set of opportunities, we wish him the very best and we’ll be forever grateful for his many contributions to Western States.