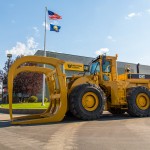 Cat® Certified Rebuilds are amazing. Not just because they save our customers loads of cash, but because of how inspiring it is to see our service department and technicians take on such enormous projects. This 1999 988F log loader is no exception.

OVER 17 YEARS OF MACHINE USE. And it showed. This machine was tired, beat up, and looked like Keith Richards after 17 non-stop years at burning man.

4,000 NEW PARTS. If each part occupied one seat on a Boeing 747 Jumbo Jet, it would require nearly 11 jets to accommodate them.

14 GALLONS OF PAINT & PRIMER. Enough to paint an average home.

And, as always, at the end of every Cat® Certified Rebuild we’re proud to say “Good as new, at a fraction of the cost.”