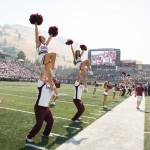 Labor Day. It may be the unofficial end of summer but this year it marked the beginning of college football season in Missoula, Montana. As thousands gathered at U of M to watch their hometown heroes take on the Valparaiso Crusaders, Western States Cat could be seen almost everywhere in one form or another.

As title sponsor, we were given generous space to make our presence known. Cat machines ranging from a 236D skid steer up to a 980M wheel loader lined the walkway between the Riverfront Trail foot bridge and the stadium. Large 20 foot banners occupied the fences inside the stadium and huge WSECO logos flashed across the jumbotron throughout the game. The Missoula team capitalized on this opportunity to host their customers with a tailgate hospitality tent and a private event area during game time.

Accepting the autographed game ball was another perk that came with being the title sponsor. Mike Herzog (Sales), Phil Hanson (Rental Sales), and Jeff Ryan (Rental Sales) from Missoula were in attendance to receive the gratuitous gesture.

Additionally, live on-air time from the statewide pregame radio show featured commentary from Michael Romans, Marketing Director. He discussed the services we offer in conjunction with the store being a local business that helps support the community.

As the game came to a close, the Grizzlies emerged victorious. Our gracious customers were happy to have enjoyed the royal treatment and comfort provided by the hospitality areas. One customer was having such a great time he even cancelled his afternoon plans to finish enjoying the event. Generating awareness, creating buzz about our company, and acknowledging customers is what it’s all about. Go Griz!