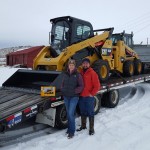 Story Update: On November 9 we ran a story about an Oregon woman who won a Cat 262D Skid Steer at the American Angus National Convention. After a lot of coordination and anticipation, we were able to catch up with Maxine and Jason Davis at the Antone Ranch in Mitchell, Oregon for the Christmas delivery of a lifetime.

We had a very cold, but exciting day on the ranch and it was great to spend some time with Maxine and Jason who were both excited and appreciative for their new equipment. Maxine couldn’t wait to get started, having already made measurements for the skid steer’s first project. Jason may not have won the 262D directly, but he was excited for his wife’s award and was even provided with a much smaller skid steer to enjoy.

It was a great day and we want to thank everyone who was involved in this memorable experience!