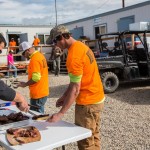 SAYING THANKS WITH STEAK.

“Sorry, guys.  The steaks are burnt and the shrimp tastes horrible, so I’ll take you all to McDonalds,” joked Russ White, Meridian Heavy Rents Sales Rep.

Russ is a familiar face to the McMillen Jacobs construction crew who are working on the Boise River Park project.  The project began in February last year, and although there are 13 pieces of rental equipment on site now, at one point there were over 30.  When development on the $7.3 million park is complete, the area will feature a whitewater area on the Boise River, fishing and boating ponds and biking trails.

Recently Jeff, the Rear Manager on the project, called Russ to ask if he could use the Rental Store grill.  The construction crew had worked over a month straight to make up time on the project, and Jeff wanted to cook his team lunch to say thank you.  So last Friday, Russ and Jeff teamed up to grill 34 buffalo steaks and three trays of shrimp for the hungry McMillen Jacobs crew.

And how did everything taste?  Judging from the long line for seconds of Russ’ steak, it turned out pretty good.