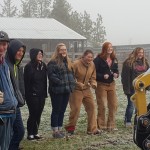 PLAYING IN THE DIRT.

Last week the Missoula branch hosted a “Day in the Dirt” for their local FFA (Future Farmers of America) chapter.

About 30 students from the Missoula High School FFA had the chance to operate a 420F, 305E, and 308E.  Cameron Pickett and the local FFA advisor were the inspiration for the project, while Mike Billet, Mike Herzog, and Larry Moritz came out to lend a hand where needed.  Though the early morning temperature was only in low twenties and many of the students were dressed as tourists for Homecoming Spirit Week, the enthusiasm in the air was not dampened.

The day started with a safety share and orientation for each machine, and then the work began.  The 420E had a backhoe bucket tip that was modified with a spoon, and students were asked to dig a golf ball out of a sand box and put it in a pail. The 305E was used to pick up soccer balls from safety cones and drop them in a trash can, while the 308E challenge was to stack tires.