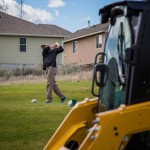 “You won’t believe this, but it’s a Friday afternoon and I’m playing golf.”

Playing golf for a good cause was a great excuse for being out of the office last Friday.  The Pasco store hosted the Sixth Annual Dump Hunger golf tournament at Horn Rapids Country Club as part of their Western Cares initiative.  All proceeds from the tournament went to benefit the Second Harvest food bank in the Tri-Cities area.

The tournament drew 100 golfers from the surrounding area, making it the largest Western States-hosted golf event to date. One of the big event attractions this year was the possibility of taking home a brand new, fully loaded Cat 242D Skid Steer. The catch? The winner must have shot a hole-in-one on hole number eight; a downhill, 170 yard, par three. Nobody sank the worthy shot this time, but contenders were already plotting their return with comments like, “I’ll be back to win you next year, skid steer!”

Indeed, many Pasco employees, golf teams, and even the golf course, are already counting down the days until next year’s tournament.