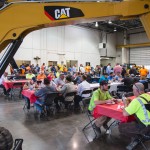 When the people in Pasco want to say thank you, they don’t mumble it under their breath or hide it in fine print. No, they shout it heartily with a meal grilled to perfection by one of their own and served in a shop spotlessly cleaned by their own. They shake a person’s hand and look them in the eye, then pile massive amounts of mouth-watering food on their plate. Because that’s the kind of people they are.

At Pasco’s recent customer-appreciation event, they unveiled a secret that not many companies have: Tim Fought, a guy who caters events when he’s not supervising at the shop. Tim has the talent and equipment to deviate from the standard burgers and dogs that large BBQs are usually limited to. And deviate, he did. Guests at Pasco were treated to juicy tri-tip, tender chicken, delicious beans and perfectly seasoned potatoes grilled, cooked and steamed over an apple-wood fire. Cookies and a cucumber vinaigrette salad topped off the meal and ensured that even the largest appetites were filled.

Aside from the food, guests were able to chat with employees, where it was obvious many friendships existed. Items and promotional material from the Cat Rental Store were on display and made for popular hangouts. Door prizes, headlined by four ice chests, lined a large table, where guests could fill out cards for the chance to win. With a line that extended all the way through the building and out the door at times, the extra attractions were welcome.

Everyone at the store put forth a lot of extra effort in making the place shine. Pat Dufault, Service Manager, was quick to assure it wasn’t all a show. “Construction is going big right now, and we’re able to ride the strength of that industry a little bit,” he said. Brad Haag, Vice President of Sales, added, “[Pasco] is one of our busiest truck shops thanks to a large Walmart distribution center nearby and Hanford [a nuclear cleanup site] is just down the road. Plus the ag industry does well, so there are a lot of industries supporting it.”

In the end, guests enjoyed a top-notch meal, genuine friendship and lots of chances to win door prizes, allowing Pasco’s message of thanks to come through loud and clear. Which is the way it should be — after all, without those guests, Western States’ success simply isn’t possible.