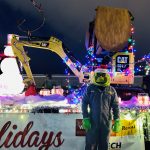 20 decorators, four machines, three and a half hours and one Grinch made the Pocatello store’s presence at the annual Night Lights Parade extra memorable this year.

The team took home the Best Commercial Award for their float on November 28. Jr Ramirez dressed as the Grinch alongside a mini excavator decorated like Max, the Grinch’s loyal dog.

“We were a huge presence there, and it was awesome to see faces light up when our float came rolling by,” said Sales Coordinator Tory Barker, “The kids LOVED the Grinch, he was a big hit.”

This isn’t the first year the Pocatello store has had a significant presence in the parade. In 2017, the team won the Mayor’s Choice Award for their decked-out float.

Participating in events that are important to the community means a lot to both the store and to community members.

“We’re a major influence in this community, and it was really important that Western States was there to show we care,” Barker said.