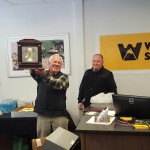 The year was 1979. Atari released Asteroids, Three Mile Island suffered a partial nuclear meltdown and Pink Floyd released The Wall. Mother Teresa was awarded the Nobel Peace Prize, Jimmy Carter was the President and both George H.W. Bush and Ronald Reagan announced their candidacy for the next presidential election.

During that same year, Sales Representative Denis Schwenk (Kalispell, MT) began working for Western States. It’s been a long journey for Denis, but now, with the year 2015 having drawn to a close, he is tackling a new adventure.

In the past year, water was discovered on Mars, the US Women’s soccer team won the World Cup title, a private company (not a government entity) launched and landed a space craft, and Star Wars Episode VII was released.

It’s been thirty-six years for Schwenk. Still, at the end of December, he brewed his last pot of coffee, said goodbye to his friends and coworkers, and, after quite the party, permanently left the store to enjoy his retirement.

His dedication to the company and his efforts to continually achieve faster and better responses to customer needs have been appreciated throughout the duration of his career and will continue to be remembered  and appreciated as his contribution to our legacy.