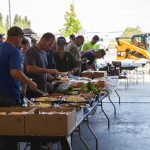 Under bluebird skies and a warm spring sun, Hayden recently welcomed around 300 guests to their customer-appreciation event. The event had generated some buzz before hand as during the team’s initial ice run, a couple guys noticed the grocery carts getting loaded with ice and asked, “Is that for the lunch at Cat? We’re going there as soon as we finish installing the billboard outside!”

So it was that the excitement for the event became the theme for the day. Guests showed up with expectations and Hayden delivered all around. A new service truck stood guard while Mark Hennes, Regional Service Manager, and Mark Swesey, Regional Parts Manager, worked their magic over the grill. Guests were able to learn about the new truck as well as the other machines on display before chowing down on burgers, hotdogs, chips, salad and cookies.

While the weather made the event about as pleasant as one could hope for, it also meant the ice that was keeping drinks cold in the skid steer bucket was turning into liquid at a rather rapid pace. It took three trips to the grocery store and 750 lbs. of ice — enough to cause a store manager to tell an associate during the third ice trip, “We’re really running low on ice. Better get some ordered.” — but guests filtered out of Hayden with cold drinks, renewed friendships and full bellies. What more could a person ask for, really? Well, unless you’re the store manager, who is probably still trying to replenish his ice stock.