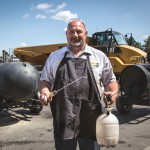 HAVE GRILL, WILL TRAVEL.

It’s perfectly normal to expect success to be a result of careful planning and execution. In reality, some of the world’s greatest discoveries have been byproducts of happenstance. For Pasco’s Shop Supervisor, Tim Fought, that’s exactly how he stumbled into catering. “We were holding an event at our local gun club and the guy we had lined up to cook never showed up,” he said. “Shortly before the event started the guy called me and said, ‘My grill is there, but I’m not coming. Figure it out.’ So I did, and I loved it!”

Since that day, Tim and his wife Birdie have spent 12 years fine tuning their menu to its current offering of around 20 items. “We experiment a lot with a crowd of close friends,” he said. “We believe you should stick to the things you’re good at, but we’ll try new things and add them to the menu after we’ve mastered them.”

If Tim’s use of the word “we” sounds like a guy acknowledging the teamwork that’s required to pull off cooking for crowds numbering in the triple digits, that’s because it is. It doesn’t escape his awareness that his team of as many as 10 people is a big part of his success. Just the prep work alone consumes a lot of time, and at that point nothing has been cooked, served or cleaned up. “Our crew will usually prep around 11 hours before we ever put anything on the grill,” Tim said. With a full-time job in addition to his catering, that doesn’t leave any time for wasted steps.

Because he’s got to maximize efficiency when cooking for large crowds — his largest event to date was a 500-plate wedding — Tim’s operation requires some special equipment. Currently he uses three grills that give him a total 28 feet of grilling space. Two are repurposed propane tanks and the other is an old water well tank with a warming oven on top. As word of his talent has spread, caravanning across the state with three grills has become less practical so he said he’s “in the process of building a big one.” The new 40-foot grill will simplify travel and help him manage time more efficiently. Both of which will be a welcome change, considering last year he traveled as far as Mount Vernon, WA — nearly 300 miles from Pasco.

With the increase in travel comes an increase in special requests as it seems every geographic area has its culinary preferences. This has forced Tim and Birdie to figure things out on the fly. “We did a wedding reception and cedar planked 60 pounds of salmon, 40 pounds of charred asparagus and 60 pounds of potatoes,” he said. “We’ve also done steak and lobster on the BBQ – which is definitely something we’re going to try and perfect.” If you get the sense that Tim welcomes the additional requests, well perhaps you’re right. His positive outlook seems ready to take on any challenge. “We figure if it can be cooked, it can be cooked on the grill,” he said.

So maybe the lesson here is that there are no accidents. Perhaps everything really does happen for a reason. Regardless, it’s evident that Tim is quite happy with the way things have worked out. “It all started at the gun club, but has evolved into a great passion of ours,” he said. It may have began incidentally, but that passion has been fuel to the fire over the course of the years — and the success that’s followed has been no accident.