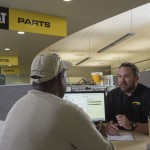 For progress, change is necessary and, Parts is seeing a lot of it. These changes have taken multiple forms.

Vice President Young sees the Technical Consultants and newly instituted delivery program as a means of catering to a new style of customer.  The structural changes, however, are a way to increase departmental career path opportunities as well as attract and retain experienced, quality parts employees. To him, this is vital to the future success of the department.

The new regional organization has been critical to the process thus far.  What was formerly four regions has been condensed to a North and South region only. With this, came two new Regional Managers, Mark Swesey and Chelsea Oyler.

Mark Swesey: Mark began his career with Cat in Sacramento, California in 1986 while working for Tenco Tractor. He worked in the service department there for 6 years prior to moving to Spokane, Washington in 1992, when he began his career with Western States Cat. Mark has served Western States in a variety of service positions for the past 23 years. He served as a Regional Service Manager for 5.5 years, through May 2015 when he made the transition to the Parts department and became the Northern Regional Service Manager.

Chelsea Oyler: Prior to her appointment as a Regional Manager, Chelsea was the Key Account Manager for AGCO Corporation, where she worked with Western States and others for four years. Prior to AGCO, she was a Program Manager in Southern, Idaho for Key Bank. She managed several of the bank’s consumer programs and enjoyed significant results. Prior to that, she served as District Manager for Health Markets Corporation.