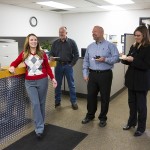 CONTINUED PASSION AFTER 30 YEARS OF SERVICE.

“When I was about 10 or 11 years old, I went to Western Equipment with my Dad. He had to buy some parts…The Parts person gave me a hat that had the company name on it. When I got back in the pick-up, I said to my Dad ‘when I grow up, I’m going to work here.’ I’ve been around construction all my life, so I guess it was just meant to be.”

In the Meridian lobby, Heavy Rents manager Steve Huling stood before an enthusiastic mob, shook hands with the woman beside him and smiled as he peered across the masses and spoke.

“It’s unusual. Who works at a place for 30 years anymore?” Who indeed? Company longevity, once the standard, is fading. The US Bureau of Labor Statistics estimates that US workers average just 4.4 years with employers, but not this woman. Steve continued “I’ve known Linda for 22 years and feel truly privileged to have her on our team and I think our team would echo that as well.”

Knowing from childhood that she wanted to work for Western States, GL Rental Coordinator Linda Monette began working for us in Meridian during the fall of 1985. At the time, she was hired as a Parts Runner and Warehouse Person. Though initially temporary, as supervisors doubted a woman’s ability in heavy equipment, Linda exceeded expectations and quickly received permanent status. From there, she moved up through the company. “I’ve always had other supervisors recruit me to their departments and that’s what happened in this position as well.”

When asked what kept her with WSECO for 30 years, Linda commented “Why not?” Variable responsibilities, opportunity for growth and her love for challenging assignments keeps her excited about her job. “I like the challenge. The reward is getting our gear on a customer’s site, and…this team rocks.” Additionally, WSECO has helped her develop more as a person “When Bill Pope hired me, I was so shy I wouldn’t even look you in the eyes…30 years later, I’m not sure ‘shy’ is in my vocabulary.”

Beyond work, Linda enjoys spending time with her family outdoors. She is passionate about snowmobiling and dirt biking, which feed her “adrenaline needs,” but she also enjoys camping, nerf gun wars, board games, traveling, and attending her grandsons’ sporting events.

While Linda loves her family and her outdoor pursuits, she will forever remain passionate about Western States as well. “Working here has been a fun ride. I’m looking forward to seeing what the future brings.”