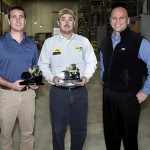 AND THE AWARDS GO TO…

“What were you all doing on Thanksgiving day?” Brian Cofer, VP of Service, asked a room full of Meridian employees.  While most employees responded with fun activities they had enjoyed on their day off, three Meridian employees had slightly different stories.

On Thanksgiving morning, Sales Representative Jason Warriner got a call from a dairy customer.  The feed lot wheel loader had broken down, and the customer wondered if Jason could set up a repair call for the machine.

It would have been easy to schedule the repair for the day after Thanksgiving – and most customers probably wouldn’t have given the delay a second thought.  However, the dairy cows still needed to be fed, and in the spirit and values of Western States, our team responded on the holiday itself.

When Jason followed up with the customer a week later, the customer was very thankful to our team for servicing his machine despite the holiday.  “Your competitor never would have done that for me,” the customer told him.

As he presented Jason, Jaime and Matt with Legacy Awards, Brian Cofer explained their significance: “The Legacy Award comes from our new Vision Statement of ‘Building a legacy with passionate people, innovative solutions, and trusted partnerships.’  This award is presented to employees who go above and beyond to not only build Western States’ legacy in the minds and hearts of customers, but who also build their own individual legacy of creating amazing customer experiences.  Jason, Jaime and Matt all exemplified our company’s core values in action.”

Brian continued, “Things like this make me proud to be part of Western States.  I couldn’t imagine working here without employees who share this kind of teamwork and devotion.”