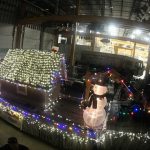 A NIGHT SO BRIGHT.

Building a parade float with co-workers is one activity that would probably rank high for team building.  Our Pocatello team found this to be true first-hand when they participated in Pocatello’s “A Night So Bright” light parade recently.  Employees from Parts, Rental, Service and Sales rallied to build the float, and then handed out toys and candy to spectators along the parade route.

Jeff Painter, Regional Service Manager, said, “Not only is the Night Lights Parade a coveted display of Pocatello community pride and spirit, but it’s an opportunity for our local businesses to give back to the community.  There’s no question the teamwork engaged in assembling the float for Western States the participation in the parade itself and the chili dinner (cooked by Western States employees and their families) served following the parade, each brought the Pocatello Branch closer together.  Thank you to all of those involved in this success!”

To top off it all off, the Western States float received the “Mayor’s Choice Award”!  That’s a pretty bright way to kick off the holidays.

Check out this video from Leo Miller of the float before and during the parade.