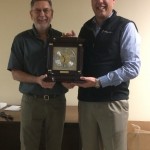 These days you don’t meet many people who have worked in the same industry for their entire life.  This makes Missoula’s Glenn Burwick somewhat of a local legend.  Prior to his retirement at the beginning of last month, Glenn had achieved almost 50 years in the Caterpillar Parts business.

Glenn started out his long career working at the nearby Soda Springs mine, and sometimes remarked to coworkers that he cut his teeth on the haul trucks there.  From there he went to work for Westmont Tractor, the Caterpillar dealer in Missoula at the time.  When Westmont was purchased by Long Machinery, Glenn stayed on to run their truck shop parts department for many years.  In 2001 Long Machinery was purchased by Western States, and Glenn returned to the heavy equipment side of the business where he was a regular fixture at the Parts Counter.

Throughout the years, Glenn has developed a well-deserved reputation around Missoula for being “the go-to guy” for any Caterpillar parts questions.  So it was fitting that when our Missoula team threw Glenn a farewell party, Glenn’s family and some of the many friends he has made during his long career joined in to offer him a heartfelt sendoff.  His teammates, recalling Glenn’s early days at the mine, even made sure his cake had a haul truck on it.

In case you’re wondering how and what Glenn has been doing since retirement, the Missoula store is glad to report that Glenn has stopped in once or twice to pick up new Cat equipment figurines to add to the collection he has been cultivating for many years.  However, Glenn is most excited about being able to run marathons more frequently, now that he has some extra time on his hands.  (We profiled his marathon running previously here on the blog.)  Glenn recently purchased a camper and an SUV to tow it, and can’t wait to participate in marathons around the country.