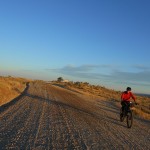 Ever wonder what it would be like to ride a bike through the Idaho wilderness? How about riding 444 miles of wilderness? For some, bike rides of this length provide a sense of excitement, awe, and accomplishment. Two of them work in Meridian.

Like many Idahoans, Andrew Fackler and Larry Cotter (two technicians from Meridian) enjoy spending time in nature. With the state’s abundant lakes, mountains, streams and wildlife, it is easy to understand why. Recently, however, these adventurers took their enjoyment further than many would dare. Starting September 9th, 2015 they mountain biked 444.5 miles through the Idaho wilderness as participants in the second annual Smoke ‘n’ Fire bikepacking (backpacking on a bike) race.

With a map that winds through multiple scenic mountain passes, the trail boasts around 40,000 feet of vertical climb. This, while difficult, was also exciting to both men.

For Andrew, the drive to participate revolved around adventure, and he found it, nearly running over a porcupine mid-race and being awakened to a Pyrenees staring him down. The Pyrenees turned out to be friendly, however, waking up with the dog’s massive frame above him was a bit startling. “It probably had 50 lbs. on Larry,” Andrew laughed.

Beyond adventure Andrew said it was quite an experience.  “I got to see a lot of Idaho that I hadn’t seen…It was completely 180 degrees different from typical day-to-day life.”

For bikepacking veteran, Larry, it substitutes for the hiking, skiing and backpacking his knee problems prevent. Beyond that, Larry said “You get to be on your own schedule…Adventure is part of it, but the freedom is what I really enjoy.”

The Smoke ‘n’ Fire race began in 2014 and is a 100% self-supported mountain bike ride though the wilderness of southern Idaho. Participants bring or acquire everything they need and are disqualified for borrowing from other participants or engaging others for help. They are able to stop at stores and hotels without penalty, but much of the route is far from those conveniences.

Taking off from Hyde Park in Boise, participants travel along forest service roads for 160 miles to Ketchum. The trail then heads north, skirting Redfish Lake and landing in Stanley 96 miles later. When participants reach the Deadwood Reservoir (mile 320), they face steep climbs and difficult terrain to Placerville, where the climb continues through Schafer Butte and then descends back into Hyde Park.

Both technicians said they would definitely participate again, but Larry says this is just a start. “The ultimate goal for bikepackers is the Tour Divide which is about 2700 miles.” That race, which runs from Banff, AB CA to Antelope Wells, NM USA, takes participants anywhere from 18 to 28 days and crosses some of the most difficult terrain on this continent.

While extremely difficult, participants enjoy the experience. “With Bikepacking,” Larry said “even if you’ve driven through it multiple times, on a bike it’s slower. You get to be a part of it, to experience it all, not just blow through it.”